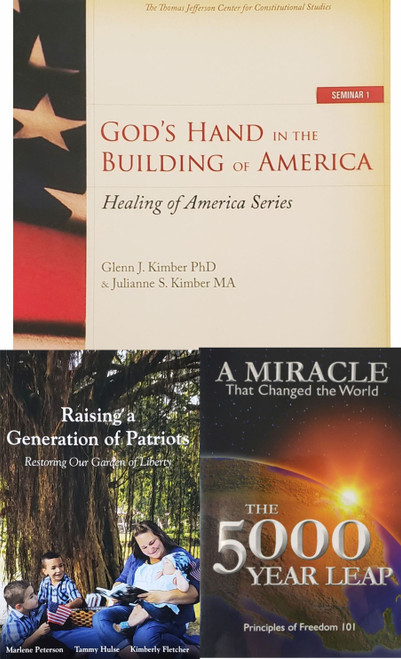 Seminar 1: You’ll appreciate more than ever that the hand of God was clearly evident in the building of this great land and will realize that the God of heaven did not establish the first free people in modern times just to see them collapse into oblivion. Most important, you’ll understand that America can be healed and that the Founders’ dream can be renewed and realized.

5000 Year Leap: The Founding Fathers were great students of history, and as such they could best represent what Americans - both in their time and in future generations - would need to understand and perpetuate for freedom, peace and prosperity to remain parts of American society. Some of these are familiar to most citizens, such as checks and balances between the three parts of government and that all men are created equal. Some are less well-known, like the avoidance of making alliances with our frindly nations and the 'genius of natural law'. Others are more nuanced than we might initially think, such as the sovereignity of the people and the advantages of a republic over a demoncracy.

Raising a New Generation of Patriots: A companion to the Cottage Meeting Resource Guide, this book gives an over view of the principles presented in the first 12 introductory presentations in the Cottage Meeting Program. Short and perfunctory, Raising Patriots is an easy read that takes just 30 minutes and is available in both eBook and soft-cover formats.

Seminar 1: God’s Hand in the Building of America